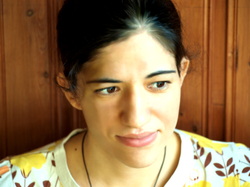 Eleni studied theatre at the University of Kent, earning a First Class Masters degree in Applied Theatre (the practical use of theatre outside the 'theatrical world', in order to achieve certain goals, specific to the individual or group). She has worked in both England and Cyprus as a workshop facilitator, in projects with adults with learning difficulties, young asylum seekers, elderly people, children and teenagers.

She has trained in video recording and editing, and in the art of combining live action with the recorded (a skill used extensively in the production 'The Jhiva of Nietzsche' which involved the filming and editing of a 50 minute film running alongside the stage action). She has also worked as a freelance graphic designer, and designs all of Theatro Transcendental's graphic work.

From 2009-2011, she worked full-time with Theatre Antidote in Cyprus, Larnaca, as Office Manager and Workshop Facilitator, teaching and directing productions with children aged 4-12yrs.

In 2012, following the initiative of the adult theatre workshops, Eleni launched the children's branch, entitled Little Box Theatre. In May 2012, the first children's group participated in the adult workshop production 'Have I grown up?' at the Melina Mercouri Theatre. The children's groups are constantly growing, and performing annual productions written, directed and performed by the kids themselves. She is constantly developing new methods of adapting the ''Transcendental'' methods, invented by Korina Kontaxaki, for young creative minds.

In 2012, Eleni began writing theatre reviews for the Cyprus Mail. Her reviews can be read here.

In 2013, she joined The Senior School as a part time GCSE and A-Level drama teacher.

"Positive. Deep thinker. Cautious. Rational. Perfectionist. Loyal. Exist entirely in my own universe. Love searching for order amidst absolute chaos. Need to do things in my own time and way. Have no interest in competition. Dislike: Discrimination, expectations, swearing, cruelty to animals and raisins. Tree Hugger. Love challenges. Opinionated. Question everything. LOVE TO LIVE." - Eleni Cosma