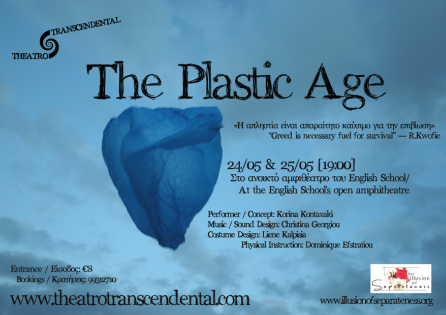 The Plastic Age
A physical interpretation of survival

During the course of the performances, a physical workshop with Dominiki Efstratiou will be offered. Click HERE for more info.

“The planet has been through a lot worse than us. For millenniums it has endured earthquakes, volcanoes, plate tectonics,  magnetic storms, hundreds of thousands of years of bombardment by comets and asteroids and meteors, worldwide floods, worldwide fires, erosion, cosmic rays, recurring ice ages … And we think a few plastic bags and some aluminum cans are going to make a difference? The planet isn’t going anywhere. WE are! Pack your plastic bags, we're going away…And if it’s true that plastic is not degradable, well, the planet will simply incorporate plastic into a new paradigm: the earth ‘’plastic’’ earth. The earth probably sees plastic as just another one of its children. Maybe that’s what the earth wanted after all. It wanted plastic for itself. Didn’t know how to make it. Needed us. Could be the answer to our age-old egocentric philosophical question, “Why are we here?”
― George Carlin

Conceptualized by Korina Kontaxaki, and developed through a series of physical workshops with internationally acclaimed choreographer and movement instructor, Dominiki Efstratiou, this insightful solo piece takes us back to the beginning; the beginning of man’s most significant relationship. His relationship with the earth.

The performance is part of the program ‘’The Illusion of Separateness’’ www.illusionofseparateness.org

"I am troubled by the materialistic, throw-away world we live in. Frequently, I question what the archaeologists of the future will recover from our age? Broken furniture from Ikea, and other types of rubbish, no doubt. In that sense, I was immediately struck by the opening of the performance. A consumer, converted into a moron, the victim of bread, circuses and advertising. Can man ever be different?

The representation of the victim’s return to a natural state, albeit with the peace that came with it (at least to begin with), worked well. Of course, her communion (and socialisation) with nature brought her into competition with others endeavouring, just as plainly, to survive also. Returning to society, as if having just woken from a dream, this time reflected in the guise of the nonsensical politician, in a sense conveyed the hopelessness of our condition: governed by our reliance upon nature (whether the fruit from a tree or a human). Survival engenders competition, chaos and frustration, and The Plastic Age conveyed this in ways I could not have predicted.

The soundtrack was intelligent, disturbing, with humorous touches (at important junctures) to lighten the mood.


I congratulate you! Well done to all at Theatro Transcendental for a highly successful work."