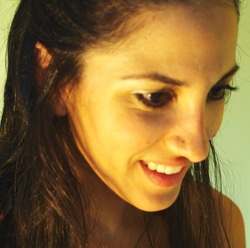 Elsa is Theatro Transcendental's choreographer, having choreographed the productions "The Room of Unlimited Possibilities" and "The Jhiva of Nietzsche".

Elsa Souroulla was born and raised in Larnaca, Cyprus. Her first steps in dance happned under the guidance of her teacher, Mrs Faidra Karavokiri Zeniou, at age four. She studied from 2003-2006 in the Higher professional school 'Rallou Manou' in Athens. After working several years as a ballet and contemporary dance teacher, she continued her studies at the university of Middlesex in the UK. In 2009 she received her MA in Choreography, and returned to Cyprus.

She has participated in various dance festivas, such as the Cloud Dance Festival in London, as well as other theatrical and musical productions, including the National Theatre of Cyprus's 'No Smoking Please' and Theatre Antidote's 'The Giving Tree'.

She has also choreographed various theatrical performances in Cyprus.