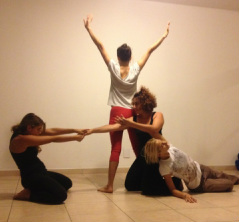 The workshop with Dominiki Efstratiou is directed at actors and dancers (professional and amateur).
Inspired by the solo performance “The Plastic Age”.

The “Plastic Age” occurred through a series of physical workshops with internationally acclaimed choreographer and movement instructor, Dominiki Efstratiou, and actress Korina Kontaxaki.
The work on the performance began through improvisations on the subject, with a goal of creating clear images and the development of a personal style of movement. Dominiki Efstratiou’s approach is one which targets the development of physical perception, realisation and awareness of the body through new experiences and the controlled connection of thought and action. She recognises the  sensitivities, restrictions and tendencies of the body and explores them, stimulating a sense of exploration, imagination and creativity.

In the five hour workshop, we will be working with some of the following techniques:
Antagonistic/symbiotic movement, quality of movement, economy and control of energy, intention and rhythm, development of a sense of the body within a space, specific improvisation. The exact program always varies slightly with the idiosyncrasies of each group.

A Note from Korina Kontaxaki:
Dominiki Efstratiou is perhaps the only movement instructor in Cyprus who can truly aid the actor in expressing himself through movement. With Dominiki I learned that to have a real connection with the audience, the body must learn to speak with honesty, authenticity and transparency. Dominiki taught me that for this to occur, the body must find its own ‘’physical vocabulary’’, the source of which can only be found inside of it. This is why we always explore the internal process which defines each movement. She constantly challenged me, ‘’why did you do that?... Which thought made you move this way?’’ She never wanted me to simply copy a movement I had seen, or to show me a move, she wanted me to find my own ‘’source’’ as she put it. She then has the incredible talent of transforming ‘’Yours’’  into something beautiful. For two years Dominiki has guided me, encouraging me to experiment with my body and my thoughts, and she has transformed my experiments into ideal movement stories. She asked me one day ‘’Tell me, what do you want to say now with your body? What is on your mind?’’ From this, ‘’The Plastic Age” was born. I hope that the opportunity can also be offered to other actors and dancers to find ‘’Theirs’’ through Dominiki’s technique. This workshop has been created for exactly this purpose – to offer this opportunity . I look forward to seeing you there!
Korina Kontaxaki

Dominiki Efstratiou was born in Cyprus, studied and worked in Germany. After her awarded graduation from the State Dance School of Leipzig, she was hired by the Leipzig State Opera.

She then graduated from the ERNST BUSCH Higher Dramatic State School in Berlin, specialising in physical education and the physical forming of the actor.

She completed 9 years as a physical forming instructor and a supervisor of physical classes at the KONRAT WOLF Higher State Television and Film School in Potsdam- Babelsberg, and was a permanent member of the judging committee for the drama school entrance auditions.

She continued her studies in the field of choreography and direction at the ERNST BUSCH, where she received a diploma in choreography.

During the course of her career, she directed and choreographed theatre and dance productions in large theatres and was responsible for the kinesiology of many theatrical performances and operas, within Germany as well as abroad.

Below are some of the productions for which she was exclusively responsible for direction and choreography: