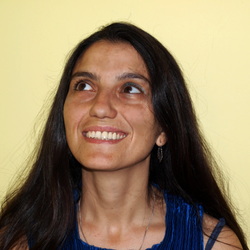 Founding member of Theatro Transcendental. Heleniq contributed to the production 'The Room of Unlimited Possibilities', designing the sound and playing live instruments on stage in the role of the soul. She also designed the sound-therapy side of the production "The Jhiva of Nietszche".

Clinical psychologist, sound therapist and drummer with a special interest in elevating consciousness with rhythm, psychospiritual techniques and creative tools.

Originally born in Zimbabwe and grown in South Africa, she studied at the University of Cape town and later Stellenbosch University. Inspired to bring the African healing drum to Cyprus, she where she currently resides and runs a network called Druminspire, dedicated to the upliftment of social society through psychology, rhythm, and art. Offering drum classes, drum therapy, and special events, Druminspire also showcases 5-30 drummer drum shows, previously collaborating with MaGaia, community of frame drummers, community drum circles currently with north and south artists in her U.N.D.P funded Heartbeat Cyprus island-wide peace-building project.

"Love, laughter, stars, light on the water, play with clay, dance, walk mountains, swim, eat healthy, love the ones you're with and tell them you do. 'He who looks outside, dreams, he who looks inside, awakes' (Carl Gustav Jung)"