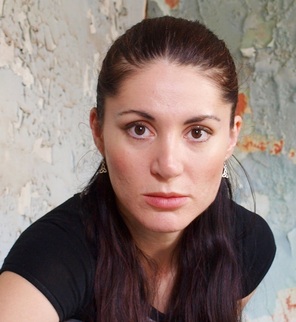 Founder of Theatro Transcendental and the Transcendental Theatre Workshops, as well as the Yoga for Performers program.
Workshop Facilitator/ Playwright/ Actress/ Director/ Yoga and meditation instructor.

Korina has worked in the field of physical theater for the past 15 years in Athens and Cyprus. Over the past 4 years, she has combined yoga and theatre in productions and workshops with her theatre company, Theatro Transcendental.

She trained as a yoga teacher in ICYER –India.

In 2007, she founded YogaLife Holistic Yoga Centre in Larnaca, Cyprus, and in 2008 in Athens. She currently teaches yoga philosophy, yoga practice and meditation at YogaLife Cyprus. (www.yogalifecyprus.com)

In 2011, she founded Theatro Transcendental, and currently works there as an actress, producer, director and playwright.

As a founding member of Theatro Transcendental, she has written and performed in:

She has also written and directed:

In 2011, she created the Transcendental Theatre Workshops;  a combination of Yoga practices, body expression and theatrical practice, offering sessions that provide equal training of mind, body and emotions for both professionals and amateur actors.

She has presented workshops at the National Theatre of Cyprus, the Edinburgh Fringe Festival, numerous drama schools in Athens and Cyprus, and runs weekly Transcendental Theater workshops and Yoga for Performers sessions at the Theatro Transcendental Studio.

She also runs retreats on Yoga and theater.

in 2013, she launched the "Illusion of Separateness" project; a scheme which, under the Theatro Transcendental umbrella, creates productions and events which aim to free us from the illusion that we are separate, encouraging a sense of unity and oneness, and urging us to take responsibility for our actions.

Her goal is to introduce more actors from all over the word to the Transcendental theatre system, which aims to make the actor an “ethos maker”; responsible for strengthening the higher mind of the audience. For this purpose, the actor’s training should guide them towards becoming a pure vehicle of light, with a powerful energy both onstage and in life. Korina’s unique training methods combines well-known theatrical techniques including those of Grotowski and Stanislavski, with higher yoga practices which serve to transform the influence of the actor on stage.

“A deep, vast interest in human nature and the challenging prospect of exploring human behaviour through the window of love….This is what inspires and enthuses action in me. From a young age I would watch people, taking mental notes. I would investigate the ways and reasons behind every human act, ways and reasons for us to become happier. Because above all, I believe that every human existence can experience this integral, transcendental, bliss…” - Korina Kontaxaki